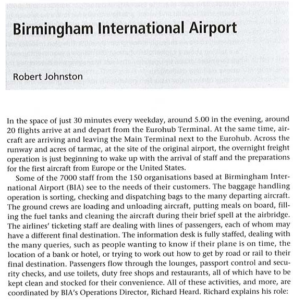 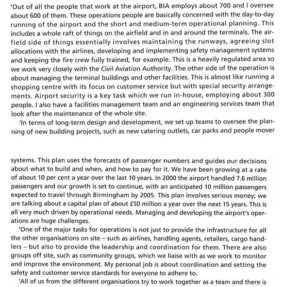 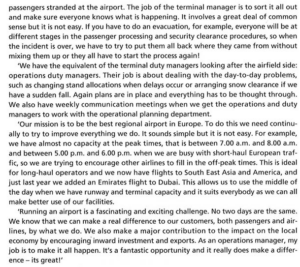 Birmingham International Airport Robert Johnston In the space of just 30 minutes every weekday, around 5.00 in the evening, around 20 flights arrive at and depart from the Eurohub Terminal. At the same time, air craft are arriving and leaving the Main Terminal next to the Eurohub. Across the runway and acres of tarmac, at the site of the original airport, the overnight freight operation is just beginning to wake up with the arrival of staff and the preparations for the first aircraft from Europe or the United States Some of the 7000 staff from the 150 organisations based at Birmingham Inter national Airport (BIA) see to the needs of their customers. The baggage handling operation is sorting, checking and dispatching bags to the many departing aircraft The ground crews are loading and unloading aircraft, putting meals on board, fill- ing the fuel tanks and cleaning the aircraft during their brief spell at the airbridge The airlines’ ticketing staff are dealing with lines of passengers, each of whom may have a different final destination. The information desk is fully staffed, dealing with the many queries, such as people wanting to know if their plane i location of a bank or hotel, or trying to work out how to get by road or rail to thei final destination. Passengers flow through the lounges, passport control and secu rity checks, and use toilets, duty free shops and restaurants, all of which have to be kept clean and stocked for their convenience. All of these activies, and more, are oordinated by BIA’s Operations Director, Richard Heard. Richard explains his role: ‘Out of all the people that work at the airport, BIA employs about 700 and I oversee about 600 of them. These operations people are basically concerned with the day-to running of the airport and the short and medium-term operational planning. Thi includes a whole raft of things on the airfield and in and around the terminals. The field side of things essentially involves maintaining the runways, agreeing slot allocations with the airlines, developing and implementing safety management systems and keeping the fire crew fully trained, for example. This is a heavily regulated area so work very closely with the Civil Aviation Authority. The other side of the operation is about managing the terminal buildings and other facilities. This is almost like running a shopping centre with its focus on customer service but with special security arrange- ments. Airport security is a key task which we run in-house, employing about 300 people. I also have a facilities management team and an engineering services team that ok after the maintenance of the whole site In terms of long-term design and development, we set up teams to oversee the plan- ning of new building projects, such as new catering outlets, car parks and people mover